Episode 158 – When Things Fall Apart: Surviving the loss of my husband with Rebecca King 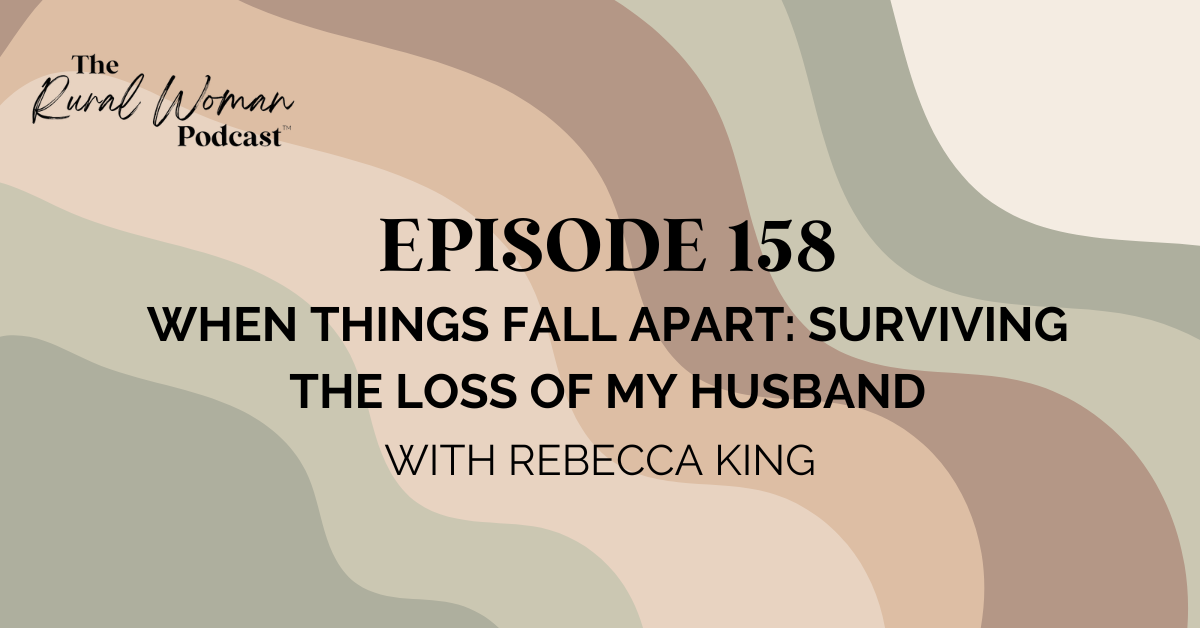 WHEN THINGS FALL APART: SURVIVING THE LOSS OF MY HUSBAND 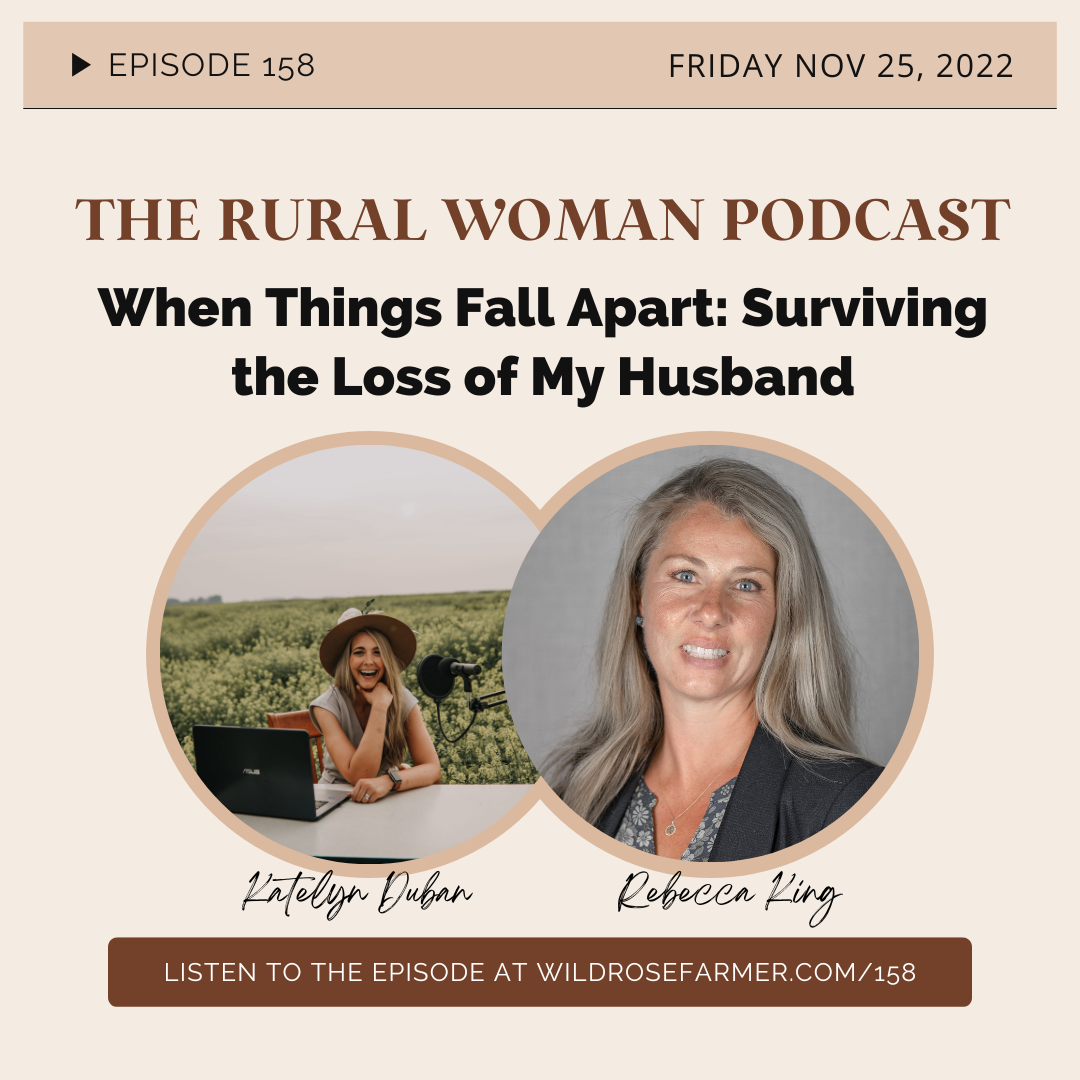 In 1997, at a very young age, Rebecca married her high school sweetheart and joined him in taking over his family’s generational farm. They jumped in with both feet determined to succeed and didn’t look back.

By April of 2006, they had completed their family of three precious daughters.

In January of 2013 the family farm became, Royal Acres Inc. Along with her husband and three daughters they were well oiled machines determined and thriving on their 2000-acre farm

Fast forward to Father’s Day, 2015. The day before was spent helping her husband fix the flighting on the grain auger in the morning and in the afternoon picking out a tie for him to wear to a friend’s wedding for that evening…A few days later…she was picking out a tie for her dear husband to wear for his funeral. He, 42, and her oldest daughter, 16, were hit head-on by a mentally unstable driver in a vehicle accident that claimed her husband’s life instantly and sent her daughter by STARS to intensive care at the University Hospital in Edmonton.

For days after, she struggled to comprehend. So unbelievable; they say it can happen to anyone, she never believed it, but she is living proof it really can.

Now, 7 years later, the family is still thriving, still grieving, and with one foot in front of the other every day, she is transitioning, preserving and maintaining what she can on Royal Acres.

Rebecca has so much information, pointers, suggestions, things she has learned and is continuing to learn, not just from the passing of her husband, but from life. She believes that sharing these things with one another is our responsibility as women, mothers and community members, to teach one another, be there for one another and remember we are not alone.

THIS EPISODE IS SPONSORED BY: 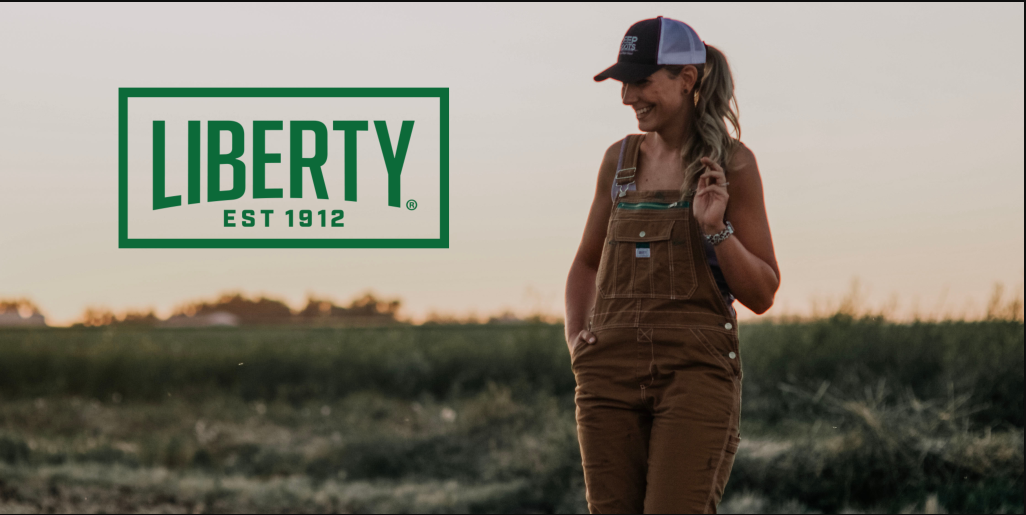 Liberty stayed the same, year after year—a name you knew and a reputation you could depend on. In the hundred or so years since, the green Liberty stripe became a badge of honor and pride in the country and county road stretches of rural America. Patents expire over time, but traditions and history don’t. And while there may be other bib overall brands on the market today, there’s only one Liberty.

Liberty is about living free. Remaining true to yourself and the qualities that drive you.​

With us, what you see is what you get. We won’t sugarcoat it, and we won’t pander to fleeting style trends pretending to be something we’re not. We make a pair that has done the job for a hundred years. It was good enough for them and it’s good enough for us. ​

Liberty is about unwavering quality and craftsmanship built to take on every task, every day. We respect folks who tell it like it is—even if it takes them some time to get to the point. So we’re telling you that our bib overalls are tough enough for your task. They work for farming the traditional way. They work for painting giant small-town murals. They work for backwoods engineering. They work for slow-smoking ribs. They work for hunting alligators in the Louisiana swamps. Heck, they even work for raising backyard chickens. Visit Libertybibs.com 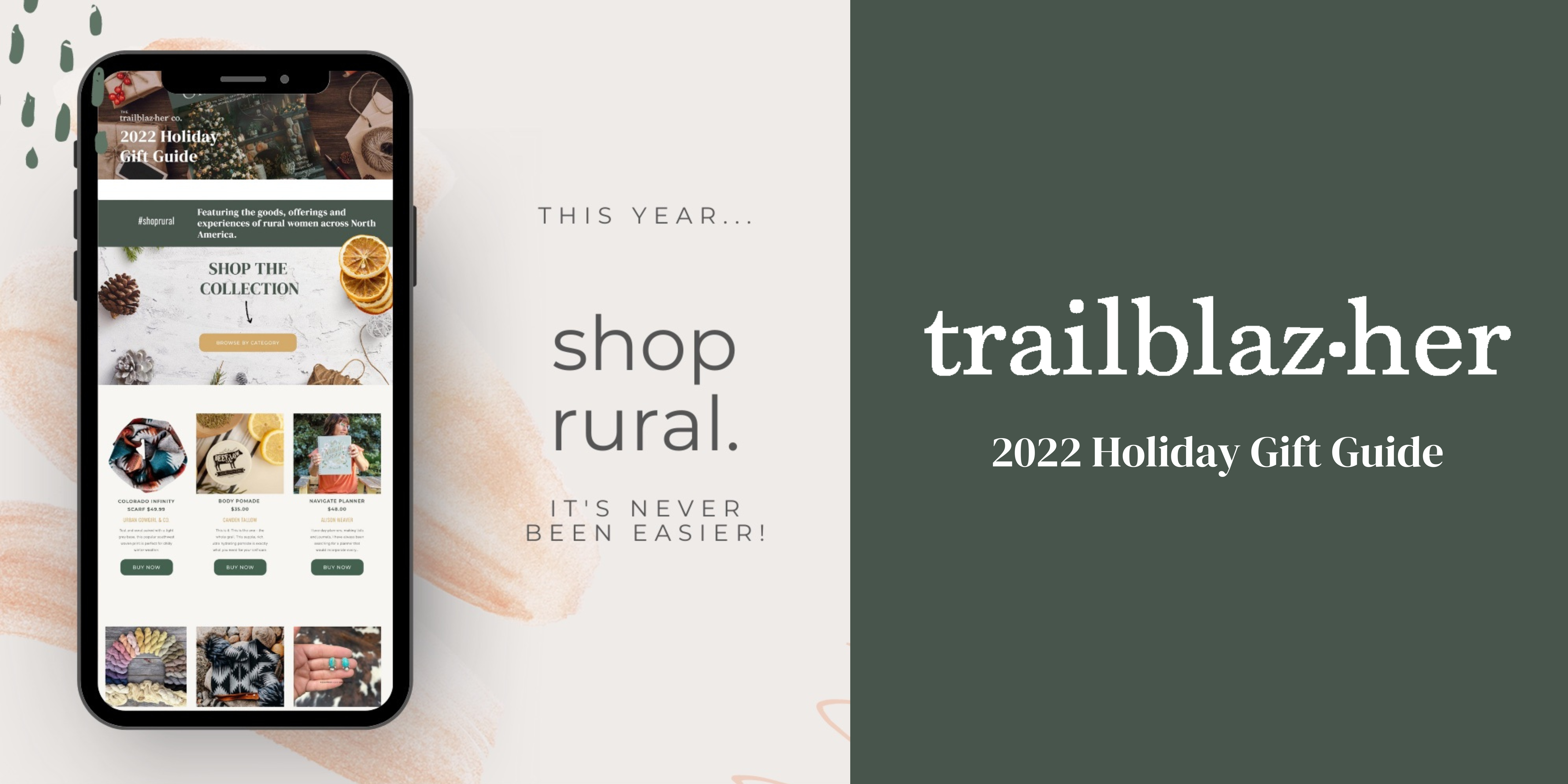 Trailblazher’s 2022 Gift Guide features the goods and offerings of Rural Women across North America. Supporting a rural woman and her business has a ripple effect. Purchasing the products and offerings in this gift guide helps make dreams come true. Rural women, their families and their communities are all made stronger when you choose to buy from this beautifully, curated selection. Shop now for the holiday season… and keep this gift guide on-hand for perfect gifts for friends and loved ones all year long. The gift guide is included in every Fall issue of Trailblazher Magazine.

Head to www.shop.trailblazherco.com to get your copy! 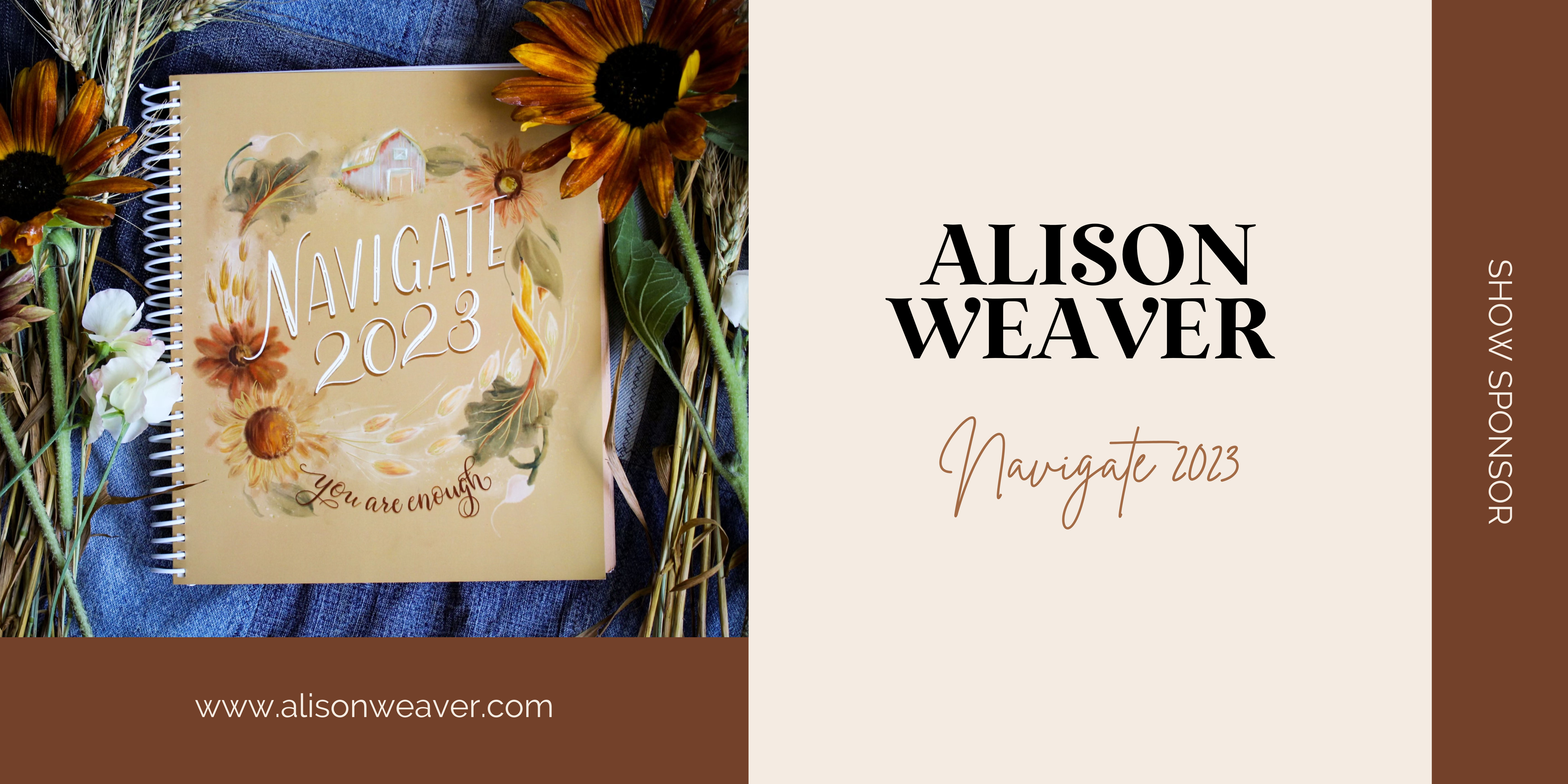 More than your average day planner! Designed for a rural lifestyle, Navigate includes everything from weekly and monthly planning pages to reflections and gratitude practices. What makes Navigate unique is a section dedicated to agriculture including facts, crop and livestock inventories, a garden map, and much more.

Navigate is made with high quality paper and the cover is eye catching but also durable. Monthly tabs help to easily navigate the book and the pocket at the back is useful for keeping track of loose papers. We hope that Navigate helps to bring harmony to your story!

Visit Navigate to get your planner!

LINKS MENTIONED IN THE SHOW 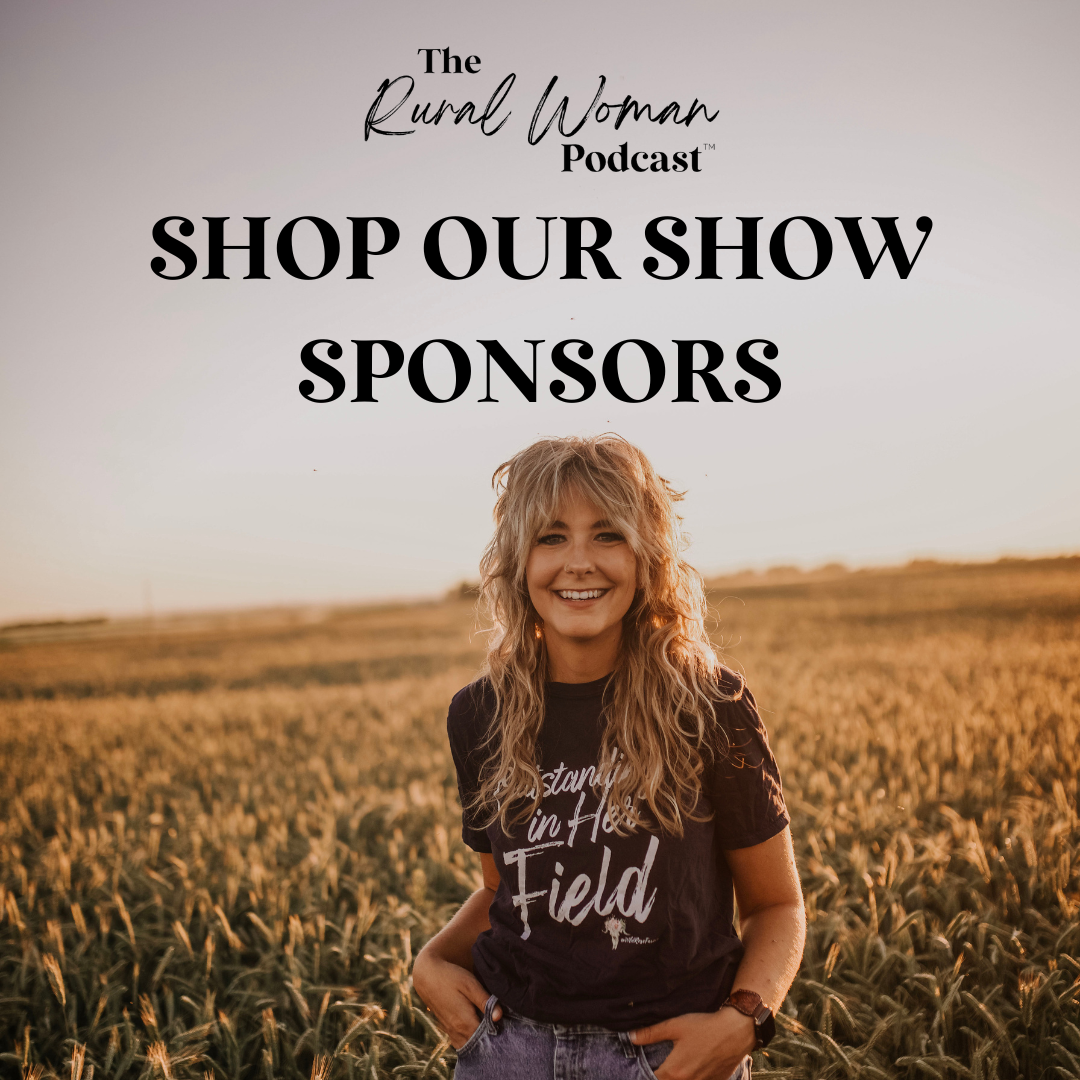 Shop Our Sponsors | SHOP WildRoseFarmer All proceeds from the shop directly support the show! | KL Skin Naturals Use promo code wildrose10 to save 10% off your order | | Market your farm with Local Line go.localline.ca/ruralwoman | Organic Tan Use promo code RURALWOMAN15 to save 15% off your order | The Cultivating Capital Course Use discount code ruralwomanpodcast to save $20 off the course | Randell Nicole Digital Designs Build your farm or ranch logo, create cohesive branding materials for your business, or build that website you’ve been thinking about with Randell Nicole Designs | First Saturday Lime use coupon code ruralwoman to save 20% off your order 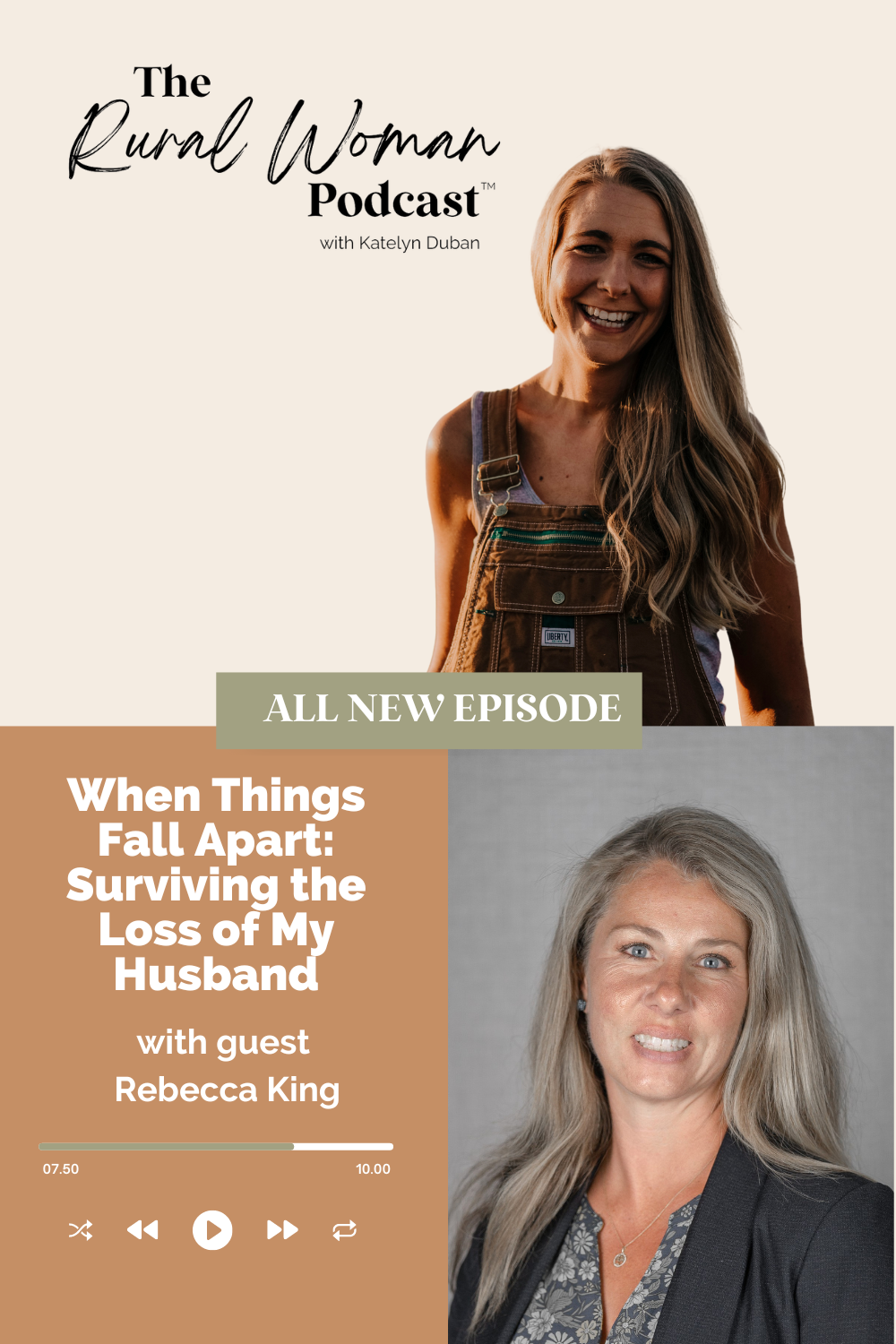